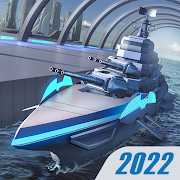 Pacific Warships: Naval PvP is one of the most popular games right now,Pacific Warships: Naval PvP has 38277+ downloads on happymod. Pacific Warships: Naval PvP 2022 has been released to version 1.1.26
PACIFIC WARSHIPSPlay a FREE modern gunboat navy game and become an armada fleet commander! Welcome to the future of naval combat! Try PACIFIC WARSHIPS in a massive torpedo and missile sea skirmish. Get your crew and guardian ship ready and deploy to cruise the Seven seas. Sea shooter meets tactics in an ultimate naval modern warfare. Tons of lethal weapons, artillery and warships to combat your enemy with a tsunami of missiles and torpedoes in a REAL-TIME online team PVP. Collect your ships in a seaport to form the best fleet from Atlantics to Pacific rim and boat the seaways where oil tankers used to sail to face the enemy in ocean war. Become the guardian of the seashore in a challenging battle! More action-packed than a ship simulator, PACIFIC WARSHIPS offers you new modern and realisti